So let’s start at the end. Recently, at the April 2019 Salt Lake FanX Comic Convention, as I am legally required to call it without being sued by the San Diego Comic Con, I went dressed up as Chara from the video game Undertale(If you don’t know who that is, or haven’t played Undertale, I may do some spoiling, so only keep reading if you have played it and/or will probably never play it and don’t care about being spoiled. Anyway, while I was there, I was looking for additional costume pieces, and I came across a necklace that seemed perfect, as it almost looked like the Undertale heart logo, and Chara is supposed to have a heart locket, so I picked it up and wore it as part of the costume. 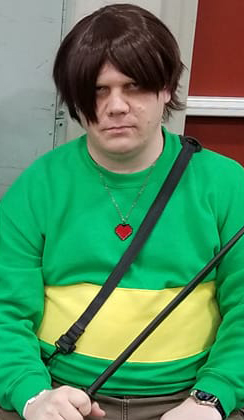 It was a pretty cool part of the costume, to be sure, but for some reason there was a little more to it. I liked wearing it. For some reason it felt good to wear it, safe, friendly. I didn’t know exactly why; after all, it’s just an 8-bit heart necklace, just metal and paint, but for some reason it felt like there was a deeper meaning to me wearing it, something that I couldn’t articulate very well at the time, but strong enough that I’ve actually worn it every day since then, often under my shirt. I’ve tried coming up with a few different articulated reasons as to why I feel such a strong connection with a piece of jewelry (other than the possibility that, like, Sauron made it, but that seems unlikely), but when people have asked me, “Hey, that’s a neat necklace; why are you wearing it?” (because, you know, a guy can’t just wear a necklace without having a reason, that’s just the society we live in) I’ve had a hard time coming up with a good, short answer beyond “I want to wear it.” For you see, the true reason is far more complicated than I can explain to some clerk at a gas station, and far more personal than I feel like blurting out to Stranger #14 at Wal*Mart or wherever.

But I shall attempt to do so here.